Skip to content
You are here:Home-Founding Families-Badrick Family
Previous Next

Henry Laidley Badrick was born in Laidley on 23 June, 1908 to parents John and Hannah Badrick of Irish/Indian stock, while Eileen Sylvia Teis came into the world on 10 January, 1913 to parents Conrad and Mary Teis, of German parentage from the strong German lineage of that area.

Both were raised on farms and from an early age learnt that the major requirement of farm living meant all had special chores to carry out. Henry was educated at the Mulgowe State School, while 30 miles away, Eileen was attending the Mt. Sylvia State School. Part of Eileen’s school curriculum in the early part of the last century, was letter writing and a young Eileen began to correspond with Myrtle, Henry’s sister. Although only a distance of thirty miles between them, the eventual meeting of the two girls saw a young Henry developing an interest in his sister’s penpal and he took to riding his push bike 30 miles along the dirt track to Mount Sylvia for their continuing romance until on the 30 May 1935, in the Apostilic Church at Hattonvale, they became husband and wife. 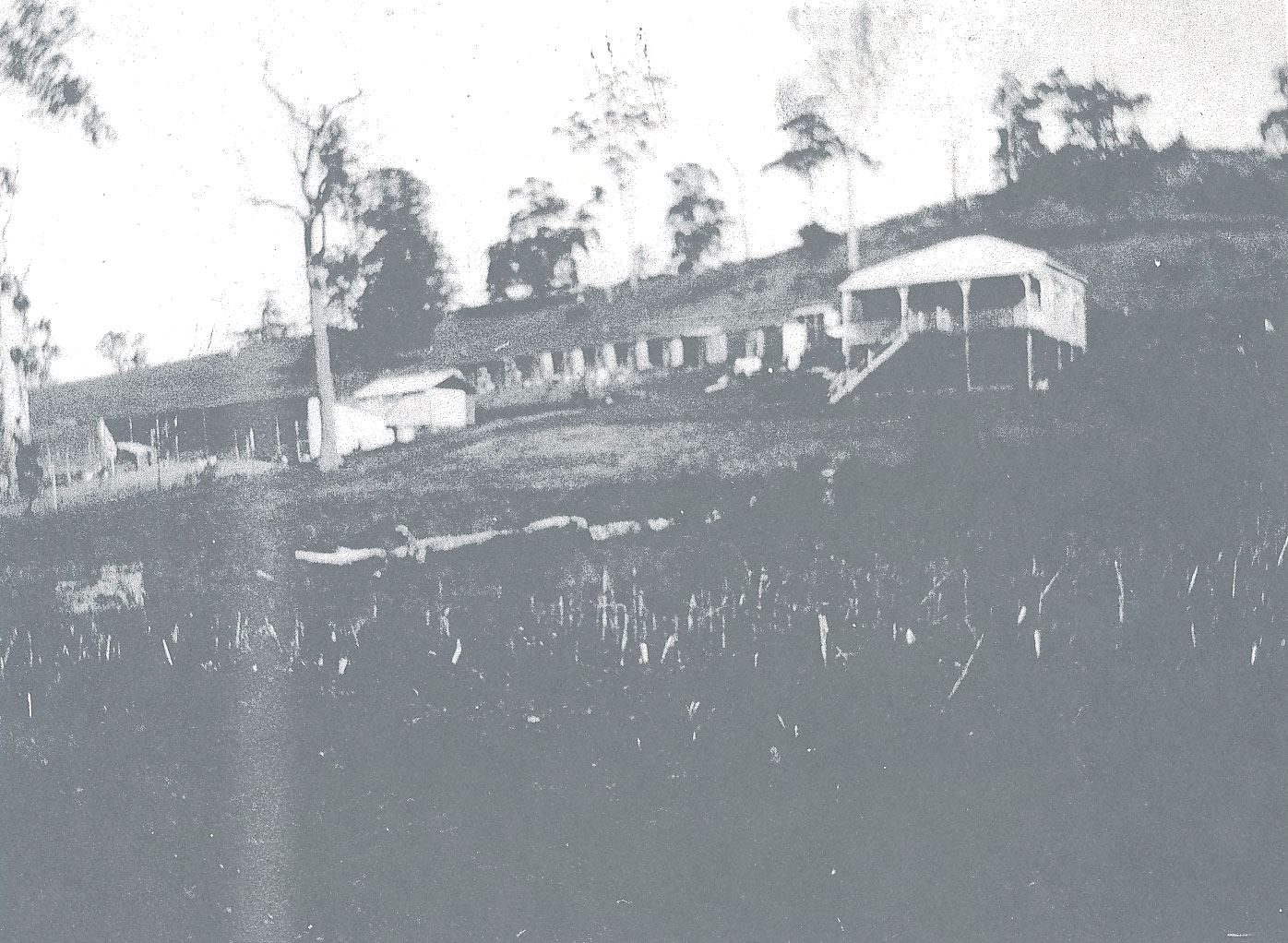 Moving immediately after their wedding to live at Kingaroy, Henry became a share farmer on a dairy farm and both he and Eileen were overjoyed with the birth in 1937 of their daughter Joyce. The commencement of a family saw the young couple wanting to strike out on their own. Two soldier settlements in The Gap attracted their attention. Lot 124, containing an area of 8 acres, 1 rood and 2 perches had been won Henry Laidley & Eileen SylviaBadrick in the ballot by C.M. Pickering and he was still in possession, in addition he had also leased Lot 11 8 with an area of 8 acres and 6 perches from the original winner, G. Ball, and sought to transfer both his leases.

After completing the deal, Henry and Eileen moved to The Gap at the end of 1937. These properties had been on a set-figure lease from the Government for the first 15 years since 1919 and continued on lease until the National Party government, under Frank Nicklen (later to become Sir Frank) allowed them to convert to freehold. The early days were continual hard work setting up the usual farm stock. Building up his milker herd to about 14, Henry started what was to become a· lifetime of milk delivery to the area. 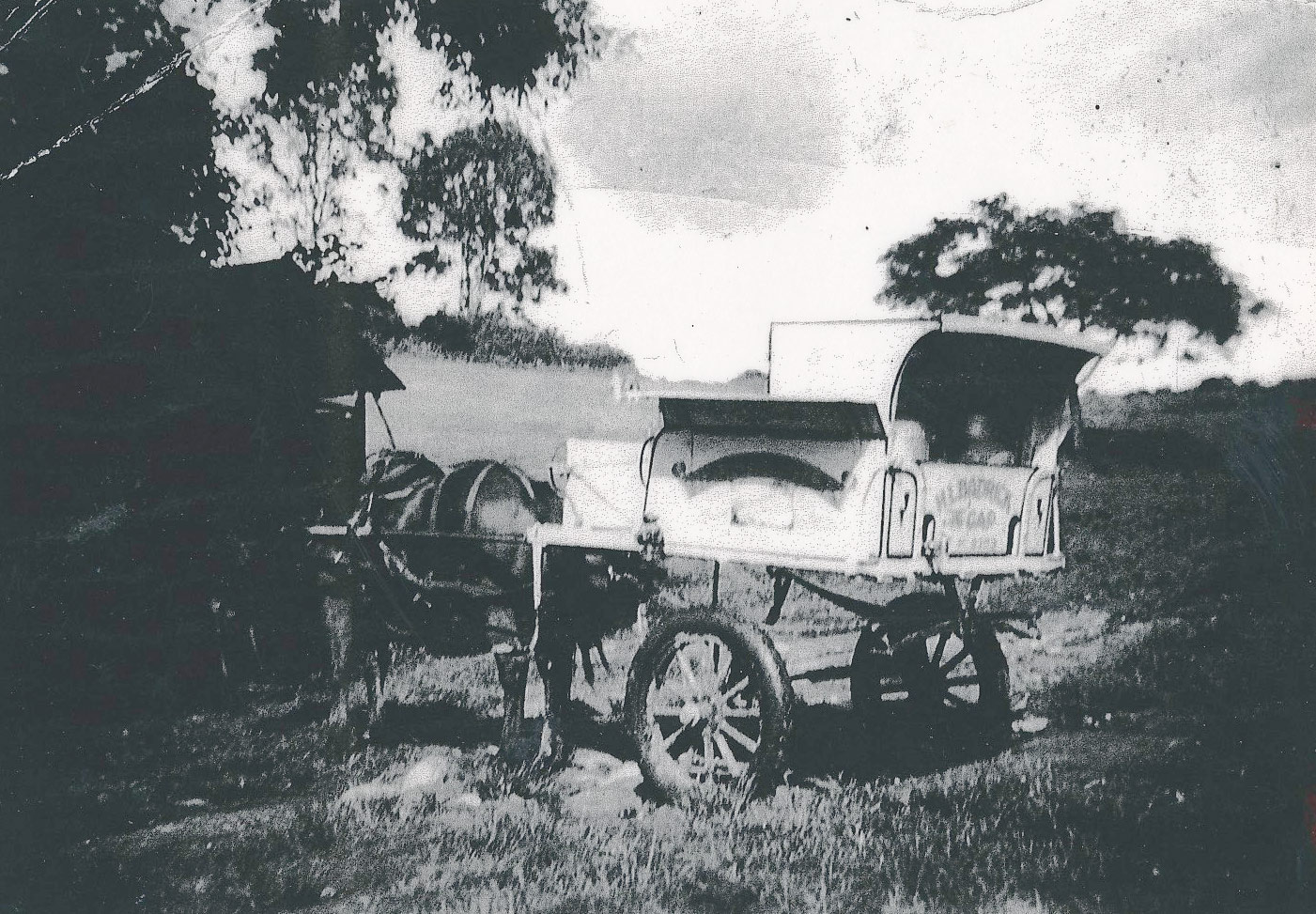 Big-Betty and the milk cart.

Back then, some of the milk carters would pick up milk from a central farm or it was placed in a small shed up on stumps with sugar bags hanging down in front, at the comer of Settlement and Waterworks Roads. Old Gapites will recall this box and it was where Henry trudged twice a day with a timber yolk across his shoulders and a 12-15 gallon can on each side.

Eileen and Henry’s home was on the next block up from where Inwood Place now exists, so present day residents can imagine the walk. Their early days here saw the birth of son Ron in 1939, then the arrival Allan (and his twin brother who sadly did not survive) in 1942 and then in 1944 the safe arrival of another set of twins, Merle and Kevin.

The five children received their education at The Gap State School. Around 1940, Henry was allocated an area at Ashgrove for the supply of milk and cream. He started with a delivery cart with wheels of steel and with rubber tracks, drawn by “Betty”, he delivered early morning and late evening. From around 14 gallons per delivery, Henry upgraded to between 30 – 35 gallons with a new pneumatic tyred outfit and to meet supply he started buying from local dairies and reduced his herd to just two house cows.

Family members remember their Dad’s milk-cart horses. “Prince” was so smart he would just move himself from house to house as the milk was delivered. Ron started to ‘offside’ his Dad when he was 10 and still gets a chuckle recalling the trip home along Waterworks Road around 6.30am one morning. Seems Big-Betty took a dislike to the sheep in the yard at the front of Masons Jam Factory and as she shied and went down on her haunches on bitumen, Ron and Henry left their seats and ended up on the road with her. 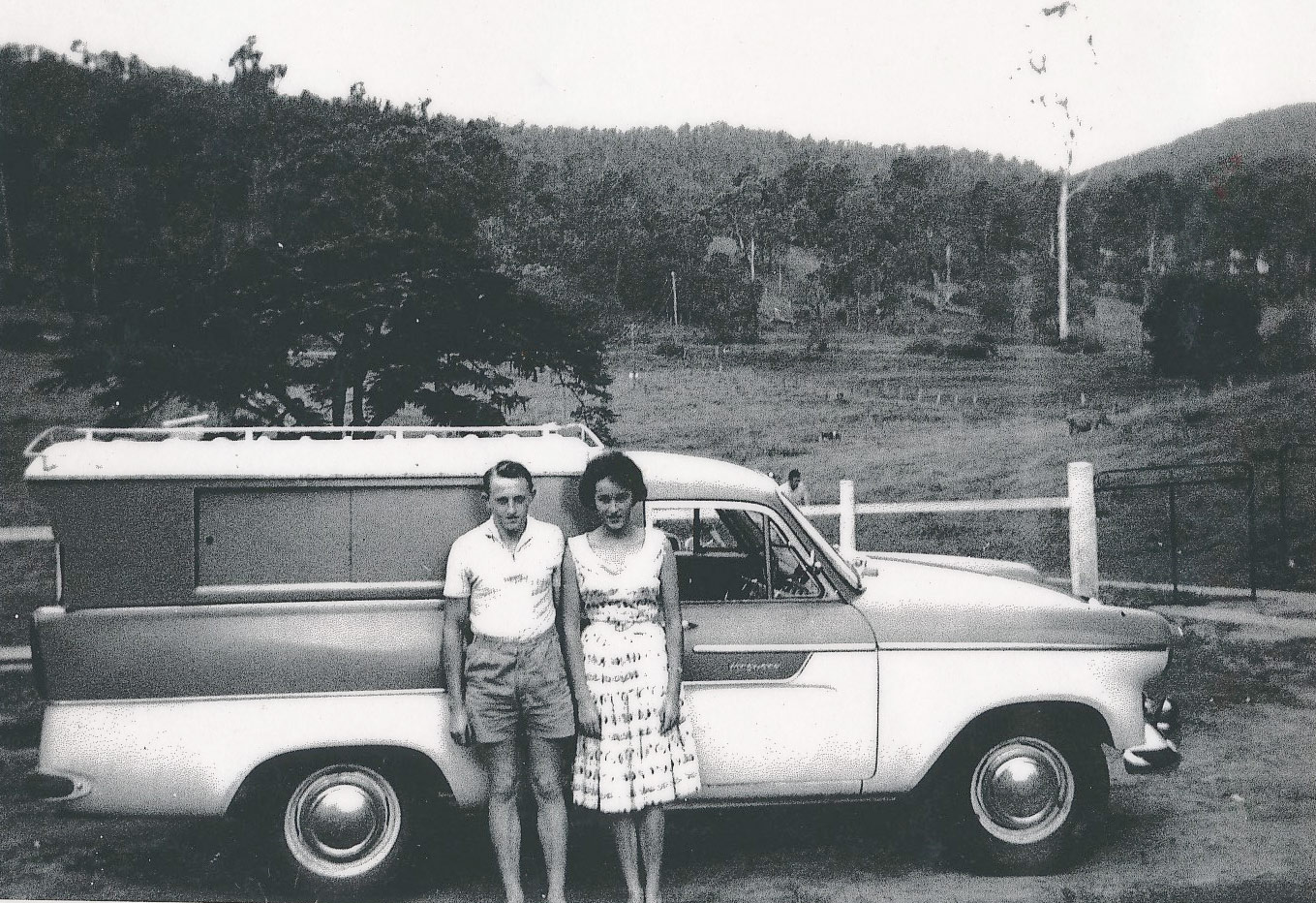 Henry left behind his horse and cart days with the purchase of a Ford 10/10 in 1950. He remembered that during the war, if an alert occurred whilst on delivery, he was to remove the horse and stand quietly with it in some front yard till the ‘all clear’ was sounded. The Ford was swapped over to a Vanguard in 1959 and remained in use until Henry’s retirement in 1968.

The Badrick name was to remain associated with milk and cream delivery to this day, over 60 years from Henry’s commencement when leaving school. Allan became Henry’s offsider and on turning 18 in 1956, Henry sold him a portion of his milk run in The Gap, including “Golf Links Estate”. Allan worked this run for three years then sold out to work for his Dad, finally buying out the business on Henry’s retirement. Kevin commenced part time in 1968 and in 1970 took over part of his brother’s run, delivering in The Gap and to shops.

Deregulation in 1999 removed all shop deliveries and of the seven ‘milkos’ delivering in our area, only two now remain. With no business to sell, 42 years came to an end for Allan and over 60 years since his father started the family business, Kevin still goes about the family tradition bringing ‘milk to your door’. 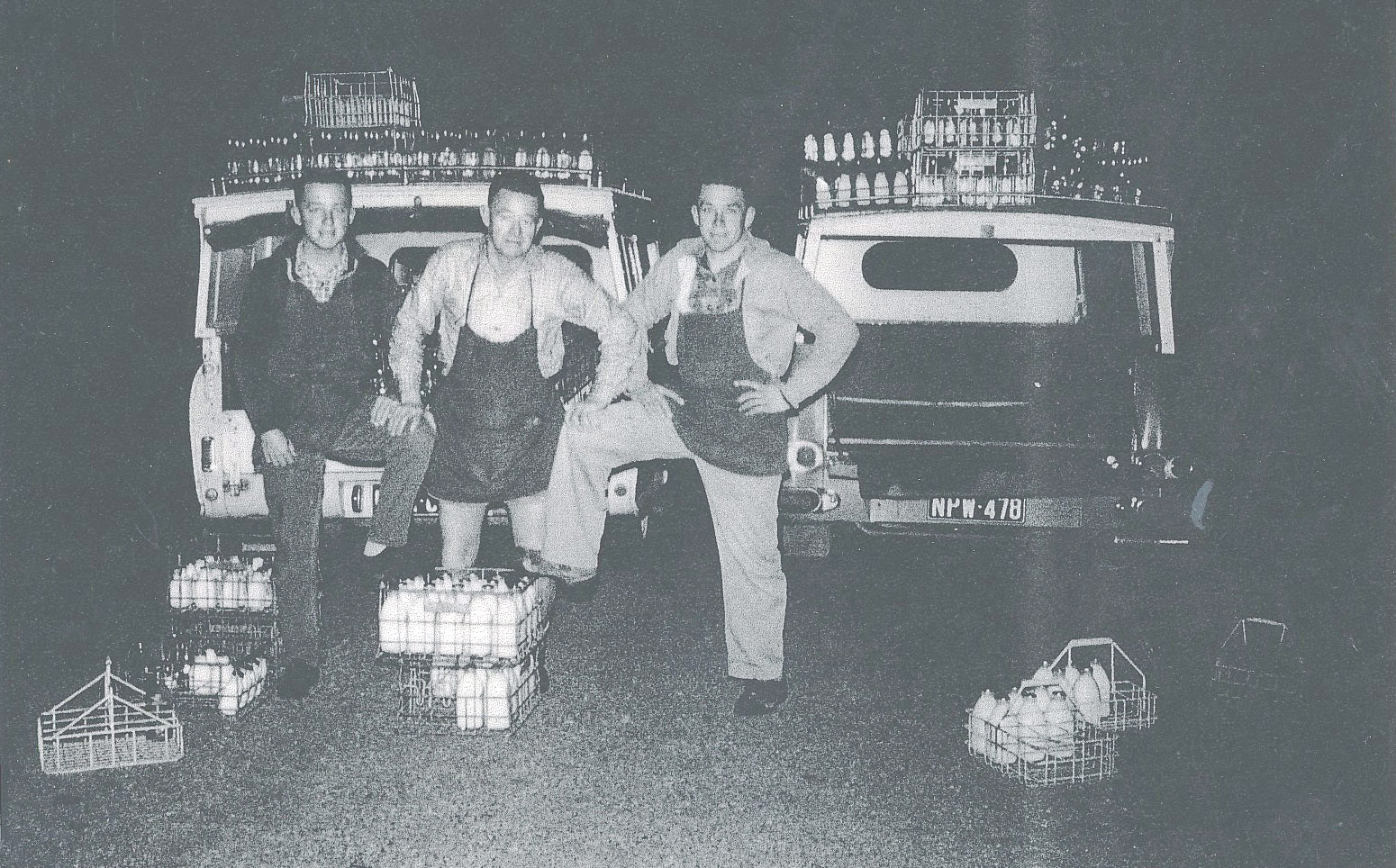 Their father’s interests in Rugby League and Cricket was to give him some relief from his great suffering with Rheumatoid arthritis which doctors were unable to assist. Taking a customer’s advice (Mrs. Watson of Ashgrove) Henry consulted a Chinese herbalist, Len Lee of Fortitude Valley, who had him back on the run in three months. Eileen was always busy with the family. Good at needlework and dressmaking, she loved her garden and jam making as well as producing ducks and poultry which eager customers sought, especially around Christmas time.

Henry died on 1 July, 1979 and Eileen on 30 August 1992 and with four married children, 13 grandchildren and 15 great-grandchildren, their contribution to our district will long remain.

Source: Reflections 3, Memories of The Gap, © Copyright 2006 by Richard Speechley
From an interview with children Joyce, Ron, Allan, Merle and Kevin.