Skip to content
You are here:Home-Founding Families-Carnegie Family
Previous Next 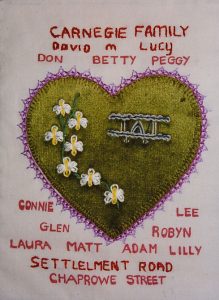 When David migrated to Australia in 1910, Lucie was to follow a year later and following marriage, lived at Sherwood where son Donald Bruce and daughters Muriel (known as Berry) and Phyllis (known as Peggy) were born.

Dave served in the Australian Army during WWI, serving in the Middle East and then remained in the permanent army until his retirement in the early 1950s.

During the second World War, Dave assisted General Macarthur’s staff with the purchase and movement of supplies, while Lucie helped form and worked with the Prisoner of War Association in Queensland.

Setting up in The Gap in 1925 at No.87 Settlement Road, Lucie attended to the running of the farm (poultry).

In 1940, Muriel married Kevin Hayes who became a casualty of the war and Peggy became a Mrs Leonard Burke and their daughter Lee resides in The Gap.

Following his return after being a P.O.W, Don was to marry Connie Proctor, the girl over the road, on the 21st May 1949.

Depicted on this panel is a heart representing a strong family bond, a Tiger-Moth plane from which Don took many aerial photos of our district and Orchid flowers reflecting his wonderful growing skills and interest in this bloom.

Don is survived by Connie and children, Glen (deceased) and Robyn, grandchildren Matthew and Laura and great granddaughter Lily.