Skip to content
You are here:Home-Founding Families-Dillon Family
Previous Next 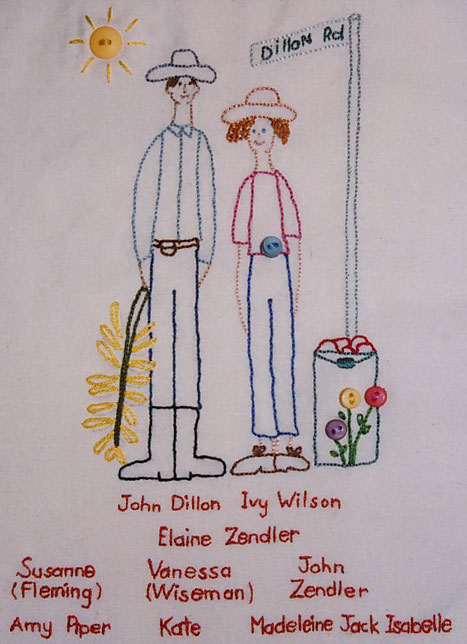 The Dillon Family quilt panel was worked by Elaine Zendler (nee Dillon). It depicts Jack and Ivy beside the Dillon Road sign, with produce from the farm. Jack and Ivy’s descendants, the joy of their retirement years, are recorded at the bottom of the panel.

This remarkable family of achievement has a long family history within its archives, stretching back to the Danish Sölling Dynasty, founders of Royal Copenhagen Pottery, on John’s maternal side.

John (Jack) Dillon was the second of eight children born on the 23rd February 1916 to his mother Petra and father Albert Henry, who was a carpenter and market gardener at Nambucca Heads, Coffs Harbour. No doubt it was this carefree life which gave young Jack the love of the land.

On completing his schooling at Nambucca Heads he spent some time working on the farm and at odd jobs throughout the area before setting off, in his late teens, exploring various parts of north Queensland, at times working on tobacco farms and enjoying living the free and easy life of a single man.

After returning home to Coffs Harbour he was nearly 23 when he attended a dance at Lowanna where he was to meet his soul-mate for life. At the age of 16 Ivy May Wilson was also at the dance and before too long it was clear to both families that here was a couple who would spend their lives together. When Jack approached Ivy’s father asking permission ‘for her hand in marriage’, he was told in very clear terms that “she is far too young. Wait a while.”

Ivy’s father and mother, Arthur and Ada Wilson ran the local Co-op store at Glenreagh, just outside Coffs Harbour and she was their only child, born on 8 May 1923. Arthur also has a team of bullocks and operated as a timber-getter, bringing in the huge logs from the surrounding hills. He had been fitted with a wooden leg after a previous accident and sadly, Arthur was tragically killed when a log rolled on him, not too long after Jack’s request and Ivy still just 16.

In 1940, shortly after Ivy’s seventeenth birthday, she and Jack married at the Anglican Church, Glenreagh on 1 June. Managing a sawmill in Coffs Harbour and living in a small cottage on site, their only child Elaine (now Zendler) was born on 15 April 1945.

The couple by now had purchased a 20 acre farm at Coffs Harbour and set about establishing a banana plantation, only to see it wiped out in the 1949/50 cyclone which devastated the area. A firm believer that education in a larger city would be more beneficial to his daughter, the property at Coffs Harbour was sold and the family moved and operated a General Store on the corner of Eton and Sleith Streets Toowong, with Elaine commencing school at Milton.

Selling the business, Jack was appointed Section Manager for McLaren Brothers at the Roma Street Fruit Markets and the family moved to Canberra Drive Ashgrove, where Elaine attended the Oakleigh State School.

Working with bananas and fruit at the markets, the call to go back to the land became too strong and Jack’s search for a property led him to The Gap, where on 21 October 1952 he purchased an area of 50 acres from Bill Proctor at a cost of £500.

Within a month he had cleared the property and purchased 317 suckers of the prime Cavendish banana variety from Ray Kratz, Shire Councillor of Coffs Harbour and President of the NSW Growers Association. Ivy, who kept detailed, wonderful diaries of events, recorded that planting started on 22 November ’52.

Work was hard and the days long with over 26 acres being under cultivation and between the banana trees, crops of beans, tomatoes, watermelons and other vegetables were grown, with many late nights cleaning and packing for delivery to the markets. Good help was always in short supply – though a number of locals often did part-time work.

Being aware of the need to have an assured water source on hand, a huge dam was designed by Jack and the Water Commission and on completion held a total of 2,750,000 gallons and is the biggest dam ever constructed in the district. Jack’s success with the farm, which he and Ivy called “El-Palma”is legendary with the B.B.C. making a documentary on the farm workings.

With ‘Open Days’ and ‘Field Day Demonstrations’ by CSIRO and DPI, the pinnacle of success came in 1959 when Jack took out the Royal National Show Centenary Medal for their competition on ‘water harvesting’.

Photographic evidence shows that in late 1960, 20 bunches of bananas from the El-Palma property were delivered to COD and weighed in at one ton. Working the farm to 1971, Jack spent time preparing the wickets for the Valley District Cricket Club and keeping the park area clean in Yoku Road Ashgrove. Jack also worked with Maurice Napier in Real Estate in the area for seven years and became well known to newer residents, before retirement in 1980.

Gradually selling off sections of the property and building a new home in what became ‘Dillon Road’, Jack and Ivy moved back to Coffs Harbour until her passing in 1996.

Jack then returned to The Gap to live with his daughter Elaine and son-in- law, Paul Zendler. He took a keen interest in his three grandchildren Susanne, Vanessa and John and their spouses. Jack enjoyed the activities of his four adored great-grandchildren, Madeleine, Jack, Amy and Isabelle.

He was to pass away peacefully on 25 September 1999 and following a service at The Gap Anglican Church, was laid to rest with his beloved Ivy in Glenreagh Cemetery Northern New South Wales.

Source: Reflections 1, Memories of The Gap, © Copyright 1999 by Richard Speechley