Skip to content
You are here:Home-Founding Families-Edwards Family
Previous Next 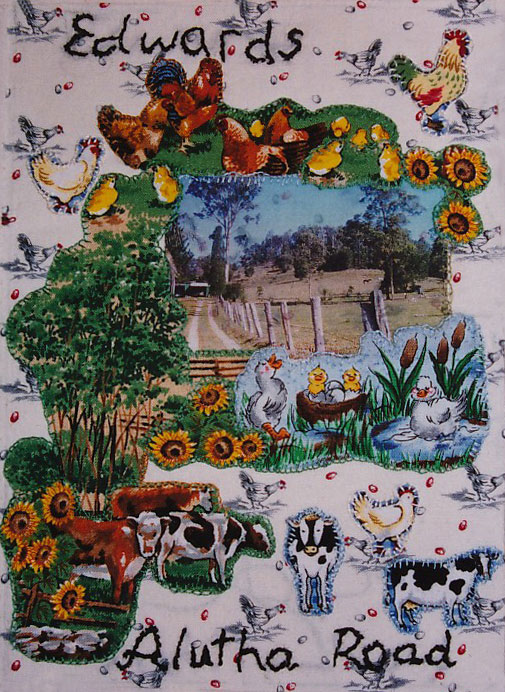 Robert (Bob) and Frances Edwards bought seven and a quarter acres at 52 Alutha Road in 1950. They bought the land from Frances’ parents Jesse (Junior) and Adeline Paten.

Bob had joined the Royal Australian Navy in 1934 and served there for seventeen years. He served in the “Sydney” in 1940, which, at that time, was with the British Fleet in the Mediterranean. (George H. Johnston’s book “the Grey Gladiator” gives an account of the “Sydney” at this time.) He also survived the sinking of the “Canberra” in 1942.

After acquiring the property, Bob built a house during his leave, with the help of his father-in-law and other relatives. He left the Navy in 1951 and started a poultry and small crops farm. He cleared the land, built sheds and dug a septic tank, a dam and an underground tank. Rainwater was gathered in tanks for household use, while water for other purposes came from a well on the neighbouring property belonging to Frances’ parents.

Bob supplied eggs to the Egg Marketing Board, live poultry to the poultry abattoirs, and dressed poultry and eggs (free-range, of course!) to various shops. The crops included bananas, and beans. These he took to the markets in Roma Street. For household use, he grew a large variety of vegetables and fruit including citrus, melons, custard apples and macadamias. He kept cows, which he milked by hand. He separated the milk and Frances made butter. She also made tomato jam and marmalade.

Their daughters Susan and Anne attended The Gap State School on the corner of Waterworks Road and School Road, walking or riding their bikes to school along the gravel roads. They particularly enjoyed walking up the hill through the bush behind the property to visit their grandparents who lived at the top of the hill.

Bob joined the Commonwealth Public Service in about 1956 and worked at Victoria Army Barracks as a civilian, keeping up the property on evenings and weekends, until his untimely death in 1973 at the age of 58. Frances remained on the property until 1978 when she sold it to Merv and Clare Batch, who still live there.

Today, Frances lives at Keperra Sanctuary retirement village, and both Susan and Ann live at The Gap.