Skip to content
You are here:Home-Articles-Food Producers for Brisbane Town
Previous Next

From the very early days of the formation of the Settlement of Brisbane in 1824, until not too long after the end of World War II in 1945, the suburb of The Gap was a supplier of all types of fruit and vegetables as well as a supplier of fresh meat and poultry. As our early settlers stood on top of the hill at Ashgrove West, the opening between the two ranges of mountains – Taylor Range to the north and D’Aguilar Range to the south, beckoned them to our valley. The opening between the hills, known back then as Devils Gap because of fear (unfounded) of our local Aboriginal tribes, it was later referred to as Bailey’s Gap the owner of the property through which one passed. This was later shortened simply to “The Gap’.

Much of the area was heavily treed with scrub and rainforest. The valley was divided by a steadily rising ridge with Enoggera Creek draining the area to the south of this ridge and Fish Creek, a fairly foreboding area to the north, made up of much marsh land. These two creeks come together at what we now know as the Walton Bridge Reserve, where they continue as one and eventually join into Breakfast Creek. The very rich, loamy soil was plentiful and in some places down to a great depth along the edges of both creeks, the result of thousands of years of soil being washed down from the surrounding slopes. Abundant wildlife provided our local tribes all their food requirements. 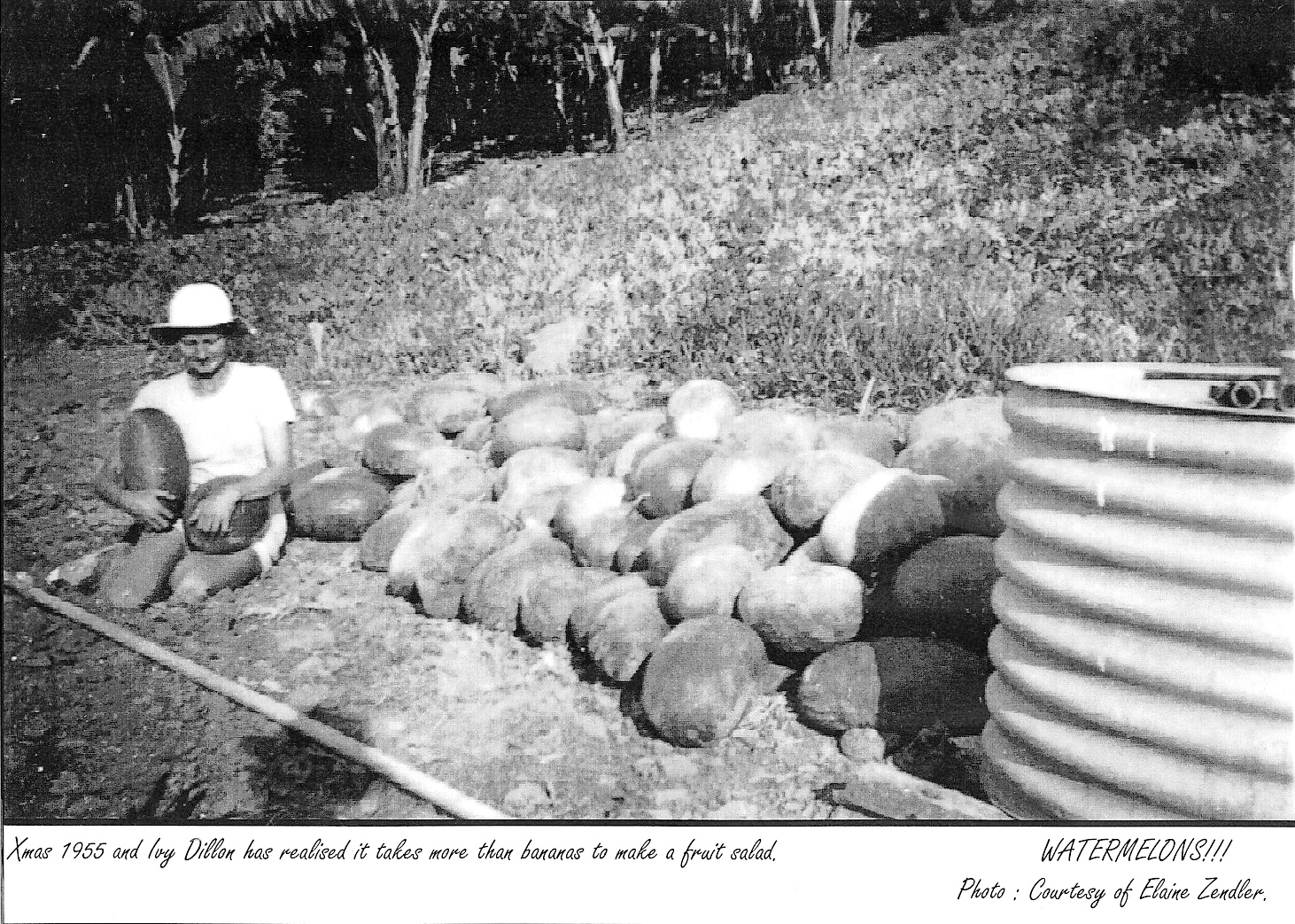 Ivy Dillon with watermelons prior to taking them to market, 1955.

Our early European settlers who purchased tracts of land in the area in 1859, followed their traditional English farming methods of their homeland, and cleared the land of all its trees and vegetation in order for the grass to grow for their stock to feed upon.

Many were intent on becoming self sufficient, their cattle providing them with milk, cream and butter and meat, and they set up cultivations to grow their crops to feed their cows and horses eg: maize, corn, lucerne and barley. As the settlers added some pigs and poultry for their own use, the house garden became a keen focus in seeing what vegetables and fruits could be grown. Local wildlife – wallabies, hares and bandicoots, often enjoyed these gardens and it is recorded that one owner to the west of Payne and Moggill Roads, constructed a fence of closed slab planks around this plot, which proved ineffective as they simply hopped over the structure. Any products produced in surplus to the family’s needs were sold to weekend travellers who visited the area prior to, and after completion of the Enoggera Reservoir in 1866, many of which were families who came out in their sulkies and traps for a picnic. For some time the roadside stalls were an added source of income and were most popular when flowers were added to the variety of produce available. The Half Moon Hotel also proved a popular attraction for weekend travellers.

C.H. Sigley, who owned 167 acres at the north western end of our district, is recorded in a newspaper printed on 11 November 1872 as having supplied a bountiful selection of stone fruits for a function held here in The Gap, while many areas of the district had plots which were under cultivation of pineapples and bananas. Pineapples were grown on the land opposite where the Ashgrove Golf Club, Waterworks Road, now stands, and in 1916 maps show a banana plantation was situated behind the golf links. ‘n warea was operated by Bill Proctor up on the creek flat where Dillon and Payne Roads meet. He was to produce a huge variety of vegetable crops, together with bananas up on the nearby hills, until he sold the property in October 1952 to Jack and Ivy Dillon. When 317 suckers of prime Cavendish bananas from the Tweed district were planted, along with crops of beans, tomatoes and watermelons, a steady flow of Dillon’s produce made its way to the Roma Street Markets. 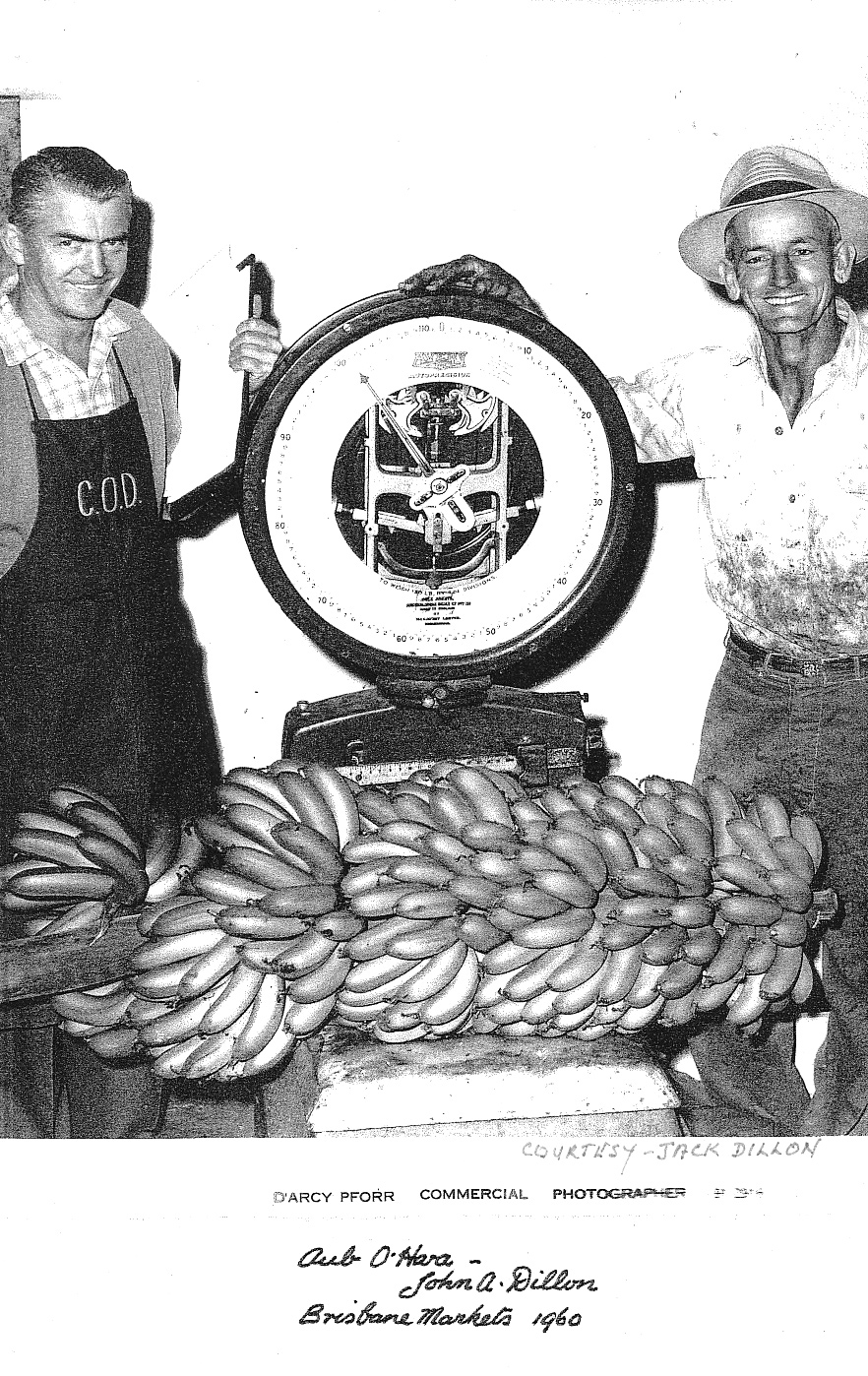 Some settlers specialised only in lettuce and by planting every second week, a steady supply was always assured. Many families had vegetable gardens and all surplus was either exchanged for other goods or produce, sold or given away.. Little did young 14 year old Bill Fursman know when he started his vegetable farm on 10 acres on the town side of the Reservoir, that he would work the land for the next 60 years, assisted by his wife Nancy for most of those years. Cec and Ethel Pickering of Settlement Road sold much of their locally produced vegetables at their roadside stall, which still stands opposite where Kevin Proctor’s Quarry now exists.

When the coming of the Soldiers’ Settlement in 1919 established the area’s poultry industry, many sold fresh eggs and dressed poultry, until all eggs were consigned to the Egg Marketing Board.

During WWII a group of locals worked most nights preparing chickens for the American Catering Corps. The “Chicken Works’ was conducted under the home which was situated next to where St. Mark’s Anglican Church now stands. The area of land later known as ‘Ashgrove Park Estate’ proved unsuccessful as a citrus orchard which was planted at the end of 1890, due to the acidity of the soil. In the area where Whitehead Road crests the hill, an Italian,

Mr Marconi, built up the soil behind small rock walls which he constructed to contain moisture in the soil, and tried his hand at growing grapes, without much success, although his bee hives are said to have flourished, possibly because of the wattle flowers which were in abundance. The production of flowers for the ‘cut flower’ industry, saw the Cowan brothers, Alec and Walter, erecting huge fern houses covered in briar roses on property to the left and above the creek in Bennetts Road (over what is now known as Cowan’s Crossing), while the land to the east of Cooinda Street was a tiered gerbera farm belonging to the Amos family. On the creek bank just up from Payne Road the Todd family had a very successful cut flower garden and Cate Inwood successfully grew fuschias and gladioli in the area we now know as Inwood Place.

Many farmers had a great interest in roses and dahlias and when these were not being exhibited were available in cut flower stalls around the district. Many enterprising young lads would be out with their hand carts selling lettuce, radish, celery, shallots etc and benefited from the results of their labour. When Mason’s Jam Factory arrived in the district, circa 1939, bottled jams and pickles were added to their variety of produce they marketed. Special Mention must be made of Willie and Jacky Onkee, hard working Chinese Market Gardeners, who toiled from morning to night on the flat behind “Settler’s Store”. Following the death of Willie, Jacky leased some land at the bottom of Barnes’ farm, on the left hand side of Settlement Road, just before Fish Creek. Jacky could often be seen carrying water from the creek in tins suspended from a yolk carried across his shoulders. Another market gardener was Ah Yum (aka George Chicktong) who worked gardens near Hilder Road School during the war years. Ashton’s Slaughter Works and Abattoir was established in the vicinity of Brompton Road in 1893 which then moved to the corner of Hilder and Waterworks Roads in 1916, where it operated until its closure in 1923.

Williams Abattoir operated in the area where Alton Terrace now stands, and specialised in products from pigs and evidence of the huge melting vats still exist in Enoggera Creek as they slowly rust away.

Many older Gap folk recall sheep and cattle being driven out here by stockmen from the Newmarket Sale Yards, which were then situated adjacent to the Newmarket Railway Station.

With the exception of a few extractive industries, little remains today of the time when our area was a major food producer for the township of Brisbane.

The poultry industry began in The Gap at the end of WWI.