Skip to content
You are here:Home-Founding Families-Low Family
Previous Next

When Edwin Low married Eliza Alice Ensor at the Parish of Hornchurch, founded by Edward the Confessor, Essex England, back in 1882, little did he imagine how his future generations would impact our valley, The Gap. Edwin’s wife Eliza was the eldest child of a family which was to ultimately have 19 children.

With the arrival of their first two sons, Frank and Harold, the decision was made in 1886 to make the big move to a new life in Australia. As a road and bridge construction supervisor working mainly on Brisbane’s northside, the family mostly lived on site in a tent and during the next ten years, the family grew to include John, Arthur, Robert in May 1891, and finally Florence to complete the family of six.

Ivy recalls her grandmother telling her that living in a tent at Grovely during the horrific rains and floods of 1893, the family took refuge in St Matthew’s Church of England and to entertain the families sheltering there, Eliza played the organ for many hours.

Not too long after this event the family moved to live on a small farm in Fulchers Road at Ashgrove. Leaving Waterworks Road and proceeding down Fulchers Road, the home was situated on the right just over the bridge.

In 1910 Robert and Arthur as very young men of 19 and 22, purchased 133 acres of land, including a dwelling, here at The Gap for 2,000 pounds ($4000). The land extended from near the reservoir east to School Road, being part of a large land-holding area owned by the Purcell family in our district. The dwelling was just near the now existing water tank and commanded a very high position with views through The Gap to the city.

The very industrious brothers called the home “Parkdale” and the farm “Ballarat Dairy” and soon became milk vendors with their own herd of milkers as well as growing crops down by the creek near where Yoorala Street now runs. On 10 May 1916 Robert married Annie Marshall of Upper Kedron, who was the daughter of Thomas and Sarah Ann (nee McGinn), in St Matthew’s Church of England, Grovely.

With the outbreak of World War I, Arthur joined up and became a tragic victim of that world event. With his non-return to help work the property, it says a great deal and full credit should be given to Rob that not only was he able to build a new home, rear a young family and operate the farm, he was in later years to proudly tell his family the property was fully paid for in 1929.

All of the children were educated at The Gap State School. When a farm hand did not work of a Sunday, Ivy assisted with early morning milking and received threepence as a reward. By the time the Commonwealth Bank started their School Banking service, Ivy had saved 15 shillings to start her account – a fine effort. Sadly at 18 years of age Edwin, who was a very keen cricketer, passed away with leukaemia.

Family members recall that the milking sheds, a big barn and horse stables, were situated up the hill from the home – now fronting Warana Street – and during WWII was the site of a search light, which could often be seen probing the sky when planes were heard flying at night.

In the mid 1920s, a Mr Manchester, Chief Engineer of the Brisbane Water Board (and after whom Lake Manchester was named), proposed the erection of a large tank on the hill to increase water pressure and in 1927 trial holes were sunk, however it was not until the early 1950s that the Council purchased the land from Robert.

After dozing and removing soil and rock to achieve a large enough level area, the Council subsequently built the water tower as we know it today. The hill was lowered by almost 22 feet (7 metres) to accommodate the tower.

The vegetables grown down by the creek were taken by horse and cart to the Roma Street Markets, usually of a Tuesday, and the boys would sometimes load their billycart and hawk the veggies around the district. 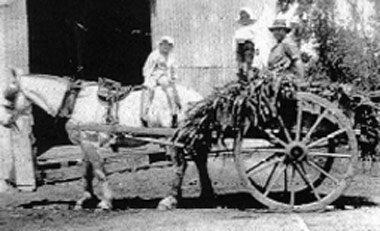 Farmer Rob Low bringing a load of corn back to his barn, with son Ted (standing) and son Ron seated on horse ‘Drummer’.

Groups of aborigines*, loaded up with staghorns, elkhorns and bush orchids from the mountains to the north west, camped on the property on their way to Brisbane to sell them. In return they would assist with land clearing.

After the war in 1946, Theiss Bros. were to remove hundreds of yards of beautiful topsoil from their big cultivation area where The Gap Pony Club now resides. The topsoil was used in the Eagle Farm Aerodrome Project.

With marriages the family spread to other corners of our valley with Ron marrying Joyce Levitt of Payne Road, Phyllis to Clarrie Bramly also of Payne Road and Evelyn marrying Jim Paten of Mount Nebo Road.

Gradually selling off the land to meet living costs, Rob passed away on 21 June 1967 aged 76 with Annie joining him a few years later on 8 December 1973 aged 80.

It was during the mid 1960s that “Parkdale Estate” was developed and many folk who settled there still reside in this beautiful part of our suburb.

* Author’s note: No doubt these aborigines were some of the last members of the Tarrbul tribe who are known to have inhabited The Gap and camped in this area of the gully leading from School Road up towards the water tank. The gully had many soaks with abundant pippies, yabbies and was well sheltered from the cold westerly winds.

Source: Reflections 1, Memories of The Gap, © Copyright 1999 by Richard Speechley