Skip to content
You are here:Home-Founding Families-Martin Family
Previous Next 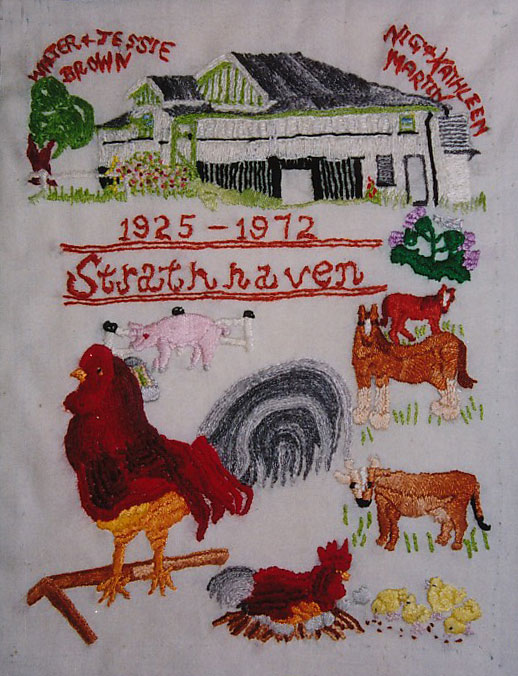 The 47th year of Strathaven Hatchery is celebrated in the quilt panel.

When Walter and Jessie (nee Dickson) Brown migrated to Australia with daughter Kathleen (born 15″ March 1900) on the ship “Strathaven” in 1911, it was only fitting that their farm here at The Gap be called “Strathaven”

Settling in their first home at Milton, Kathleen completed her schooling at Milton State School, then had a career as a tailor until her marriage to Percy Martin on the 18th September, 1926, in the Ann Street Presbyterian Church.

Percy Thornelle Smith Martin, affectionately known to all as “Nig,” was born on the 115 May 1900 at Helidon and educated there until he was 11, leaving school to help support his 10 siblings. Working at the local butchers and all types of jobs on farms as well as learning to operate machinery, he was learning life skills which were to prove a great asset in his later life.

The family moved to Kelvin Grove for better education opportunities and Nig was to become a driver with “Finney’s Transport Company”.

On 11th May, 1925, Walter and Jessie purchased lot 92 here at The Gap on the western side of Hilder Road on the corner of Waterworks Road. Containing just on 8 acres, the property was part of the original soldiers settlement and had a modest cottage on it. They were soon growing crops, had various farm animals and some poultry and it was to this farm a young Kathleen would bring her new beau, who she had met at a Scottish social and Walter grew to like the lad who showed a real interest in farming life. Theirs was to become a lifetime of trust and respect.

Kathleen and Percy (Nig) married on the 18th September, 1926, in the Ann Street Presbyterian Church. Jessie diedsuddenly in 1931, so the young couple moved to be with Walter, and Nig continued as a truck-driver, helping every spare moment on the farm.

Two children, Kathy born 19th September, 1934; and John the 26th October, 1936, brought much joy to the household – both becoming pupils at our local school.

In 1941, Walter signed an area of land over and Nig set about to get “Strathaven’” up and going. He was to design and make various labour-saving inventions as well as collecting many awards for his breeds of poultry. Nig passed away on the 12th August 1953 and Kathleen and her Dad carried on, assisted by local man, Roy Vinter, who had worked for them since the age of 14. Following a fall, Walter passed away in 1956 and Roy and Kathleen battled on ‘til Kathleen became ill in 1963.

Attempts to sub-divide into housing lots were continually rejected and faced with another round of crippling “Death Duties” resulted in its sale at a rock-bottom price to a developer who was prepared to wait for The Gap to grow.

Source: Reflections 2, Memories of The Gap, © Copyright 2000 by Richard Speechley