Skip to content
You are here:Home-Founding Families-McMullin – Althouse Family
Previous Next 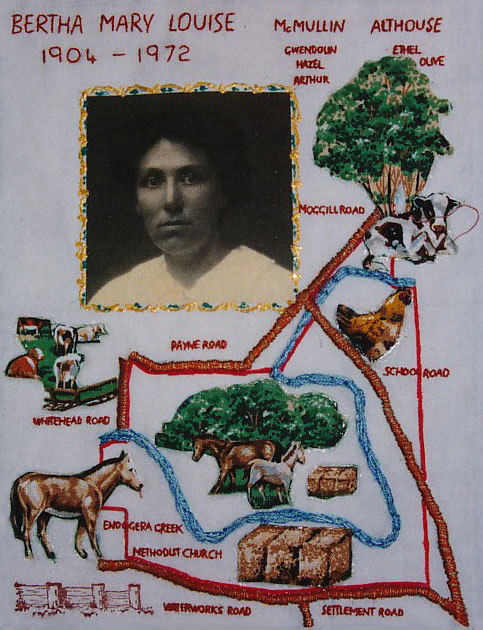 Bertha Mary Louise Winsch was born in 1884 and following her marriage to Robert McMullin they lived and operated a small business (shop) in Frasers Road, Oakleigh (now Dorrington).

Moving to The Gap in 1901, three children, Gwendolyn (Queenie), Hazel and son Bertram (Arty) were born.

In this quilt panel her image reflects the acute acumen she was to display when the loss of Rob in a freak accident left her a widow with three young children. She soon had share-croppers working the farm and contributing to her upkeep as she purchased further land for development until she could proudly say she owned an acre of land at 1 pound for each day of the year.

In 1916 she re-married to John Althouse, a share / cropper farmer and they had two daughters, Ethel and Olive.

A very benevolent person as far as the community was concerned, she contributed awards to school pupils and built a tennis court beside the school on her own land at her expense for their use.

She contributed to the cost of moving the “Anzac Hall” from Settlement Road to Waterworks Road – again onto a block of her land, for the continued use of The Church of England and local usage at a minimal charge.

At one stage, owning all the land on the south side of Waterworks Road, from the Uniting Church to the Pre-School, each of her children received a good start by being allocated a parcel of land.

Many residents today live on land Bertha sold them for 50 to 75 pounds an acre, often paying it off at 2/6d or 5/- shillings a week.

Created by grand-daughter-in-law Bev McMullin, the centerpiece shows the 41acre farm. The creek bounded by Riaweena Street which in 1956 became “Ashgrove Park Estate”.

The Gap Historical Society was responsible for having the bridge over Enogerra Creek in School Road named the McMullin–Althouse Bridge in the family’s honour.