Skip to content
You are here:Home-Founding Families-Proctor Family
Previous Next 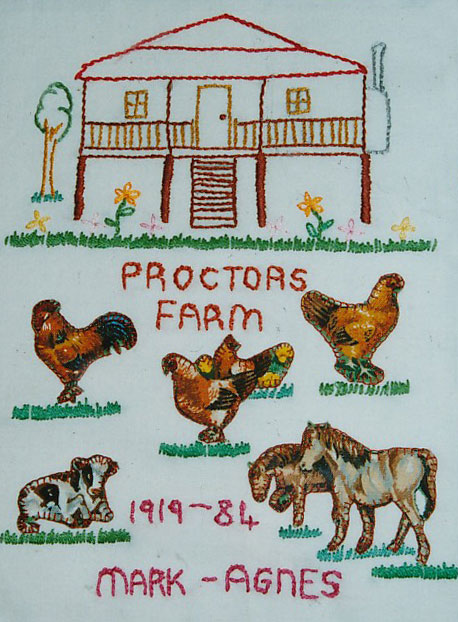 This quilt panel depicts the high-set Queensland type of home on their farm in Settlement Road, and their birds and animals. 1919 to 1984 commemorates the 64 years of marriage Mark and Agnes worked side by side to create and enjoy a very happy life here in The Gap.

The name of Proctor is as synonymous to The Gap as bread is to butter. Mark Walter Proctor, born on 4 April 1889 in Great Harward, Lancashire England, had completed his education at the local school by the age of 13 and immediately began working in the pits, below ground, at the local coal mine. In 1912, at the age of 23, he decided to effect the biggest change in his life and seek his future in Queensland.

He worked his passage to Brisbane and as the railway system in our state was undergoing rapid expansion, he immediately found work as a fettler with Queensland Railways and worked for a time on the Kilcoy Howard Line and then on the main north coast line.

Working in the Rockhampton area at the outbreak of WWI sees Mark fronting up to the recruiting office to answer the call of the day “your Motherland needs you” and was sworn into the Infantry, 9th Battalion on 31 August 1914. He was to serve a total of four years 14 days in the army, including three years 315 days on overseas service and much was to happen to change the course of his life.

Sailing with the 9th aboard the P & O ship the S.S. Omrah, the arrival in the war zone saw the 9th Battalion immediately assigned to the landing of Gallipoli and while many of his mates paid the supreme sacrifice, Mark received only minor wounds. It was while on service in France that he received what his records show as “a shot in the neck and left shoulder”. Along with other ‘Diggers’ he was evacuated to the Salisbury Convalescent Home in south west England. After some time Mark began to feel much better as his wounds were healing, however at times he was still suffering severe pain, due to shrapnel not having been removed.

One day at the nursing home he learnt that a number of girls were doing their bit for the war effort by helping to harvest the local hops crop. Before long Mark and some of his mates were off to assist. The girls greatly appreciated the help, especially the extra weight of men jumping up and down to force more hops into the bags.

Mark was especially attracted to young Agnes Kate Frost, who was ten years younger being born on 9 April 1899, to Robert and Kate Frost in Sheet, Petersfield, Kent. Resplendent in his army uniform, Mark and Agnes were to marry in the Methodist Church in Street on 4 July 1917.

The termination of the war on 11 November 1918, saw the men on their way home, many of whom had married English lasses – all had to leave their wives behind. The wives were to follow their husbands in early 1919 on what was referred to as the ‘Brideship’. Today it is hard to imagine the thoughts and fears those in the Brideship may have endured – leaving their loved ones and country behind, travelling to an unknown country, would their husband still want them now he was home, plus for many the misery of sea sickness on the six week journey to Australia.

In 1919 the Queensland Government set out to place many thousands of the returning servicemen on small farms and in the balloting system to select for the 43 blocks available here in The Gap, Mark secured Lot 101, containing an area of seven acres two roods 35 perches, which was situated on the corner of what is now Settlement Road (originally Myall) and Kaloma Roads. The lease rate for 15 years was to be £4 one shilling and four pence (approximately $8.50) per year.

For a while after their reunion Agnes and Mark rented a room at Kelvin Grove. They were to receive a grant of £600 which was to be used for building a cottage, buying a horse and cart, fencing and stock, along with the building of sheds and stocking with chickens to get the poultry industry up and running.

The supervisor of the Settlement Cottages, Peter Rumble, was the first to build on Lot 102 in Settlement Road, with George Curtis and Harry Paten being the contracted builders and James Campbell doing the iron roofing and plumbing work. The Government Store and the Community Incubator Buildings were also constructed on Lot 102.

Though still affected by memories of the horrors of war, and the pain of his wounds, Mark set to, establishing his poultry farm and he and his wife were to greatly rejoice with the arrival of their first son, Robert Thomas, was born in February 1920. The loss of Robert, a victim of the meningitis epidemic, at the age of 10 months saw their beloved son laid to rest in our local Methodist cemetery (now the Uniting Church).

The first few years of the setting up of the poultry industry was thwart with three years of drought and extremes of temperatures reaching up to 104ºF., which wiped out many of the chickens. A great many of the settlers sold their leases to newcomers and a number increased their holding by taking over their neighbours leases, while some just walked away.

Like many of his digger mates, Mark took to often having too much to drink and for some time experienced many low times. With his family increasing, life was tough on a pension of £2 a fortnight ($4.00), however the house cows, veggie garden and some chooks kept the family going.

In 1934 a Christian Revival group sought permission to set up their big tent on the flat at the rear of Mark and Agnes’ home, which Mark refused. The tent was erected where the local RiverCity Church (previously the Gap RSL) now exists. The Proctor children were arriving home in the rain and were invited into the tent to shelter and when Mark, taking umbrellas to find them, located them at the gathering, he too was invited in and was greatly touched by their humility and kindness. He gave up his drinking and smoking, established a market garden and became one of the proudest fathers of his ‘brood’ in our district.

All the children were educated at The Gap State School. Many grandchildren at The Gap High School and with descendants at last count numbering 101, for 70 years a Proctor appears on the roll.

Being the eldest girl in her family, Mark made a promise to Agnes’ parents at the time of their marriage that Agnes would be home to England for a visit in three years. In fact it was to be 52 years later, in 1971, after selling their home in Settlement Road and moving to Bromar Street, that Agnes travelled alone and on her first flight, for a 21 day sentimental visit home to see the remaining members of her family. On her return she told her family the only change to the home of her childhood was the gas had been connected along with water, which had previously been obtained from a well at the rear of the property.

After 64 years of marriage, Agnes passed away on 10 September 1981 at the age of 83. Not too long before her passing, she was to see a plaque placed on Robert’s grave in our local cemetery, which gave her great peace of mind.

Connie recalls that on her wedding day to Don Carnegie on 21 May 1949, a piece of shrapnel was removed from her father’s neck – having worked it’s way out with a festering sore. Mark lived with Connie until his death on 4 August 1984 aged 96, and Connie recalls how stoic he behaved in his final years.

From an interview on 27 August 1999 with Connie Carnegie and May Grimes (nee Proctor) and Jack Proctor.
Source: Reflections 3, Memories of The Gap, by Richard Speechley.