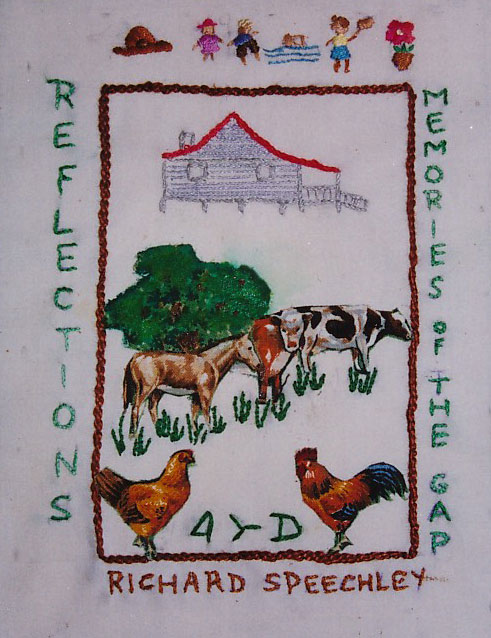 Having spent his life in The Gap, this panel commemorates the printing and release of his first book “Reflections – Memories of The Gap on the 8th December 1999.”

Educated at the local school and by primary correspondence, the farmhouse depicted is where he lived and spent much of his childhood growing up with family and Aunt and Uncle, Mr and Mrs Wilfred Chapman. Farm animals represent the 41 acre farm, which in 1956 became the “Ashgrove Park Estate”.

Designed and crafted by wife Pat, the figures at the top refer to his involvement in the formation of The Gap Scout Group in 1951, preparation to opening of the Kindergarten in 1961, Secretary of The Gap School Swimming Club in 1968, involvement with the Taylor Range Country Club and The Gap Garden Club. The 4 (Y sideways) D = Four Young Devils – livestock brand of the farm, appears at the bottom of the panel.

Marrying Patricia Bell of the pioneering family and landholders of Enoggera on the 6th October 1956, three sons – David Stewart, Randall Richard and Cameron Scot, all have contributed to the welfare of the community.

Writing his first book while undergoing dialysis, the success led to interest and formation of The Gap Historical Society Inc. Returning to good health after a successful kidney transplant, another book – “Reflections 2″ was launched by the Society in November 2000. 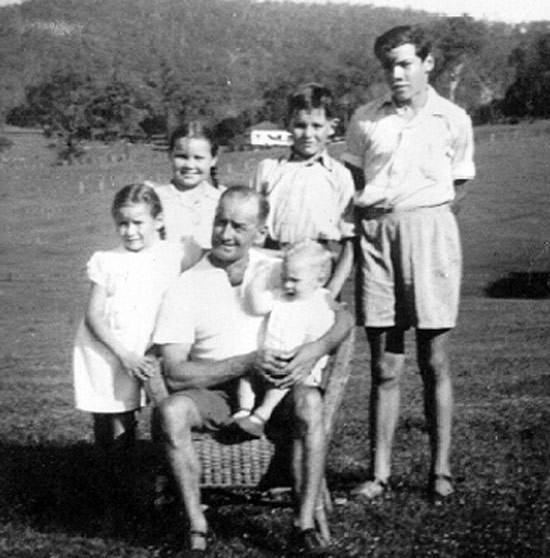 Richard Speechley (far right) pictured with his family. From left Dorothy, Beverley, father Dick nursing cousin Brian Best, and Alan outside the family home situated at the highest point of where Illowra Street is now situated. The home in the background is situated at the junction of Payne and Whitehead Roads.

The launch of Reflections – Memories of The Gap, was held on 8th December 1999 in the River City Church, Settlement Road The Gap, with the (then) Lord Mayor of Brisbane, Jim Soorley doing the honours in introducing and presenting a copy to a member of the 14 pioneering families mentioned in the book. The launch of this book, coupled with the interest generated in the history of The Gap area, led to a group of interested locals forming The Gap Historical Society in 2000.

On the 1st of November 2000, Reflections 2 – Memories of The Gap was launched by our Councillor for The Gap Ward, Geraldine Knapp. This second book contained stories of a further seven families and the launch was held in The Gap Historical Society’s premises, the Nullagundi* Centre, School Road, The Gap.

Since then our local publication The Western Echo has continued to publish, on a monthly basis, further stories and reflections I have enjoyed writing, to which I have received feedback and comments from readers. On many occasions during the last six years saw me catching up with folk and places long forgotten, where the stories have ended up.

Reflections 3 – Memories of The Gap, is not a definitive history of our valley, but one recording the trials and accomplishments, background and achievements of those families who let me delve and question members of the family and who provided many wonderful photographs. I thank them most sincerely.

*Nullagundi is an aboriginal name meaning “great meeting place”. It was first used by the Walton Bridge Guide troop who built and occupied the building originally.