Skip to content
You are here:Home-Founding Families-Serico Family
Previous Next 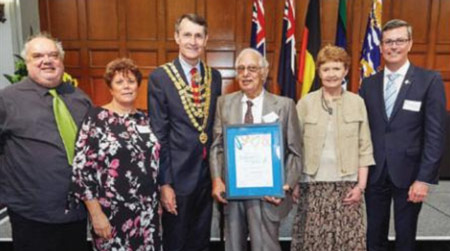 I first wrote of my life-long friend in the February 2010 issue of The Western Echo and it is now appropriate to update his rich heritage to his community, particularly in light of Nurdon receiving the Lord Mayor’s Cultural Arts Award in the 2018 Lord Mayor’s Australia Day Awards. It is from a very strong ethnic legacy and loving family background that I write this story of a life-time friend, so much admired and known to many in this area and far afield.

Nurdon Horace Serico was born the second child, brother of sister Evelyn, to parents Maurice and Evelyn Reen (nee Monkland-Olsen) Serico on 21 May 1933 at the Lady Bowen Hospital, Wickham Terrace, Brisbane. Maurice was a member of the Fungallu people of the Taroom district and Evelyn Reen, who had been born on the banks of the Mary River at Tuchekoi, near Gympie, was a member of the Gubbi Gubbi people who are inter-related with our district’s Turbal aborigines.

In 1939 the family moved to their home in Empress Terrace Bardon, from where Nurdon and his sister became the first aboriginal children to be enrolled at the Ashgrove State School. Nurdon was to spend all his primary education years there and though not stop of the class’, he was into all the sports offered – athletics, cricket, football etc. and was to become the school’s first State Title holder when, in 1945, he won the Broad Jump (now called Long Jump) at the state’s Primary School Boy’s Championships. Still under 14, he also won three sprint titles in the 50, 100 and 200 yard sprints (these events are now raced under the metric system).

Following Grade 7, Nurdon’s secondary schooling was at the State Industrial High School in Edward Street, Brisbane. Here his sporting prowess saw him not only win the 100 yard State Secondary School title, he set a new State record in the 200 yards and during his time at S.I.H.S. he was awarded blue pockets for rugby league, cricket and athletics.

One occurrence, while at high school still brings a smile to his face. It was decided at this boys-only school, to teach the lads the fine social graces of dance. Calling in the (then) well-known dancing instructor Sandy Robertson, classes were soon underway. One thing Nurdon resented most was dancing with another boy. How on earth could he learn under those conditions? He took it upon himself to approach the head teacher and suggested that the girls from nearby State Commercial High should be invited down to learn. While still in the head teacher’s office, he was to be witness to a call placed to the head teacher at SCH and within a week the boys were learning to dance properly – with girls.

As his father Maurice was a strapper and masseur at West Leagues Club, it seemed only natural that Nurdon should join the under 14s and played A Grade with Wests for the next 15 years. Maurice, who was known as “the man with the golden hands”, served not only his local club but State, Australian and visiting overseas teams in that capacity. He was also an active member of the Bardon R.S.L. and was founder and trainer of the Bardon Athletics Club.

On leaving high school before the final year, Nurdon obtained an apprenticeship in fitting and turning with the Brisbane City Council’s Tramways at Boomerang Street, Milton. He stayed a number of months before moving to Central Purchasing at City Hall, then after eight months, moved to a cadetship in Radiography at the Royal Brisbane Hospital. This career change was to see the State Health Department have a dedicated employee for the next 49 years. Nurdon completed his course at Queensland University, graduating in 1954 in the presence of his very proud parents.

In 1959 Nurdon married Pat Thrower, a girl from Goondiwindi, moving to The Gap with their three children, Maurice, Michael and Melinda who were to attend both primary and secondary state schools in The Gap. Nurdon and Pat’s granddaughter, Emma Jane, is also a muchloved member of the family.

Working the early or late shifts, at times ‘on call’, saw Nurdon’s appointment as Senior Radiographer and in 1968 became this state’s first Neuro Radiographer, setting up the first unit. In 1970 he was appointed Technical Officer, an advisory position being responsible for the establishment of all units throughout the state of Queensland.

In 1976 Nurdon was awarded a Churchill Scholarship to further his career in radiography, which saw him spend time in the United Kingdom, Europe and the United States while on his study tour. Throughout his many years with Queensland Health, he spent a great deal of time travelling the state setting up training programmes for regional systems in country hospitals – now extended – and also facilitating conferences to bring city and country together, often over three days in centres such as Cairns, Townsville and Mackey, bringing staff from the country to the coast.

His retirement in 1999 was a sad loss to the department at the Royal Brisbane Hospital – he had served for 49 years and yet, in that time, he had served many years on other committees of great worth. A warmly felt departing gesture was the naming of an x-ray facility in the Orthopaedic Department in his honour.

As a member of the Advisory Council on Aboriginal life, times and traditions at the National Museum Canberra, his role included the design of that aspect of the building. After 20 years on the Board of Aboriginal Health Service here in Brisbane, he was made a Life Member.

Playing cricket for The Gap Pastime Club for a period of 24 years, at times Nurdon served as Chairman of the Cricket Committee.

A keen interest in photography, especially of a historical nature, many in our local area, Nurdon has served on the committees of both the Ashgrove and The Gap Historical Societies and has also been VicePresident and President of The Gap Historical Society and at present is Patron of the Balaangala Community Group which aims to bring together indigenous and nonindigenous Australians through sharing creative practices.

Both of Nurdon’s parents lived well into old age, Maurice passing in 1998 (aged 99) and his mother aged 96 in 2005. At the time of Evelyn Neen’s death she had been Senior Elder of her Gubbi Gubbi people for a long period. Nurdon’s sister Evelyn is now the senior spokesperson.

Within his own family, Nurdon’s wife Pat was to pass away in 2014 after 58 years of marriage with daughter Melinda coming home to look after her Dad. Elder son Maurice is keenly involved in Aboriginal affairs, being CoChair of the State Aboriginal Reconciliation Council and Chair of our local Balaangala Community Group.

Nurdon is also extremely proud of his granddaughter Emma Jane (daughter of Melinda) who teaches English and History in Secondary Education at the Murgon State High School, both subjects close to his heart.

A most pleasing aspect of his contribution to the community during retirement, is the ten years spent with the Murri Court. In this regard, he counselled offenders and advised the Magistrates of Aboriginal Lore and Laws and is now retired from this position.