Skip to content
You are here:Home-Founding Families-Smith Family
Previous Next 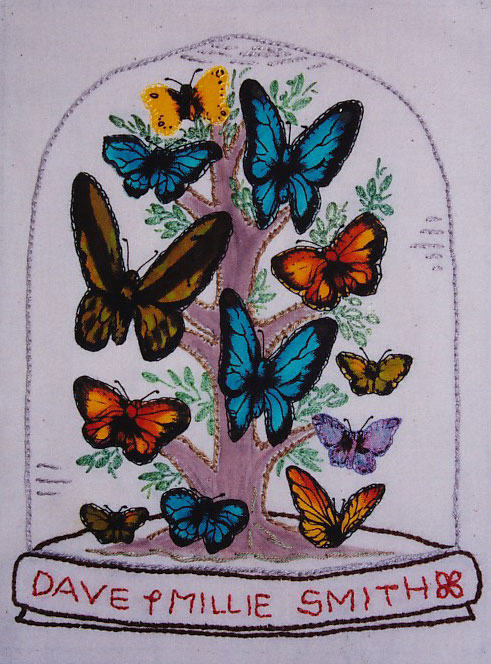 The beautifully crafted panel by Julie Rowe shows the great interest Dave has in his hobby as a lepidopterist first, collecting and breeding Butterflies for over 70 years, which together with his work as a taxidermist, has seen his craftsman-like patience to each mounting recognised around the world.

The son of Frederick George Tarva Smith and wife Hester Florence (nee) Judd, he moved from Kelvin Grove where his Dad had a furniture making business with his family to The Gap in October, 1922 onto 43 acres to the north of Walton Bridge. The property was called “Estrilda”. As well as poultry, his Dad bred and sold all types of birds, snakes and animals and his Dad was to teach him the skills of taxidermy.

Amelia was born at Red Hill to Albert and Dohline Heyer (nee) Cottrell and spent a time living with her parents at “Muldoolun Station” Mt. Tamborine, then returned to live at the care-takers cottage on a farm-let in Greenlanes Road.

On a picnic at Walton Bridge in May of 1932, she was to meet Dave and they married at West Ashgrove Hall on 45 August, 1934. With two children – Allan and Beverley, they have four grandchildren and four great-grandchildren. Married for 67 years Dave and Millie are keen supporters of The Gap Historical Society.