‘Walton’, noted for it’s extensive gardens and as the Paten family home, was named after a village near Jesse Paten’s birthplace, Aylesbury

Walton, the home of Jesse Paten (1842-1930), one of the pioneers of The Gap, was built at about the time of his second marriage, to Eliza Hunt, in 1876. It was a single story timber farmhouse, pit sewn on the property, with wide verandahs and a semi-detached kitchen at the rear. It had a shingle roof and curved iron sheeting over the verandahs.

At the turn of the century a second story was added, transforming the original farmhouse into a spacious country home of over 50 squares set in a formal garden with flower beds and ornamental trees. There was a small orchard along the eastern side of the garden and a large fernery abutted the house on the west. At the rear there were the kitchen, the kitchen garden and a double stable with a harness room. 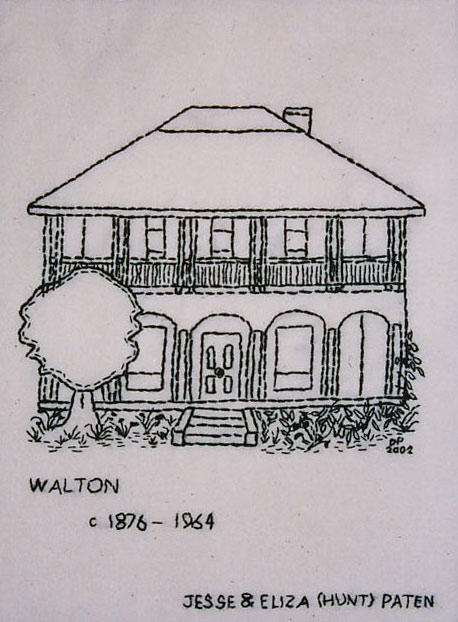 The embroidered panel of Walton is the work of Del Paten, the author’s wife, who spent her early married years there and who restored the garden to some semblance of its former glory. After the demolition of the old house they built their present home in The Gap, on land first bought by Jesse in 1862, thus preserving the historic tie.

The house suffered the fate of so many early Queensland timber buildings when It was severely damaged by termites and borers in the 1930s. Although restoration work was carried out intermittently over the years that followed, it was approaching the end of its useful life. Its final owner, Jesse’s grandson and the author of this note, reluctantly reached the decision that it was beyond economic repair and it was demolished in 1964.

Walton was built on Portion 168, Parish of Enoggera, land purchased jointly by Jesse’s father John and elder brother Philip in September 1858 at the first land sale in The Gap. It was set back 100 metres on the south side of Waterworks Road, where the Coles Supermarket now stands in The Gap Village Shopping Centre. The name Walton was taken from the village of that name near his birthplace of Aylesbury in Buckinghamshire, England.